Welcome to the Sonar Group. We are a family run independent record and publishing company based in Coventry, UK. We have been established here for over 30 years and have several labels – Sonar Records, Frantic Records, Psalm Reader Records, and Dodgy Ticket Records and have a catalogue of local artists on vinyl and CD. We have a webshop on bandcamp.

You can see us at The Coventry Music Museum

We have been using Groovy cart for our vinyl retailer but unfortunately they closed this year so I’ve moved the shop to Band camp.  New products for 2020 are the Sonar Records Vinyl Clocks in 2 sizes – 7″ and 12″ –  Find them here. 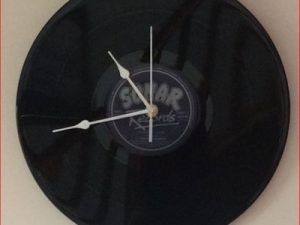 Cary has been back into Big Sky Studio to start work on her third album with the working title ‘Songs from the Dairy’.  This is her first all country album with 14 original songs  in ‘the can’ awaiting mixing.  Cary is recruiting extra help from various musicians across the globe on this one – Steve Giddings plays lap steel on a few of the tracks and Nashville based McMillan brothers contribute banjo, harmonica and fiddle.

The Monks have been working on a new album of original songs and this has now been released. Arcanum Monachis is the latest work from the monks, 11 original tunes in the monks usual style.

Cary L has her track ‘Single Bed’ on the latest ‘ALTERNATIVE SOUNDS VOL III’  available from Bandcamp or Head Records in Leamington spa. 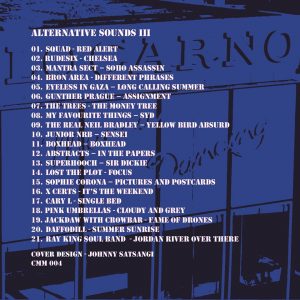 Sonar Artists Crokodile Tears and Cary L are now in the official local charts with Paul Sanders at 24 and 26 respectively!!!!

Here is Week 57 Of The Official Local Charts

The Mysterious Monks are working on a new album for release in 2019.  We are looking forward to RECORD STORE DAY on Saturday 13th April.  Be sure to check out our vinyl products in Head records in leamington Spa!

Hello October, with Christmas within our sights, you might want to get down to HEAD RECORDS in Leamington Priors and pick up some Sonar stocking fillers!

Great news that HEAD records in Leamington Priors are now stocking Sonar Artist products!!!    Pop in to browse Crokodile Tears, Courtiers Of Fashion, Furious apples, Cary L, 20 Days, The Sweethearts and Mysterious Monks.  Treat yourself to a limited edition 12″ from Laughing House, Decipher the mystery of the Monks with their CD’s,  discover what was ‘Maid In Meriden’, and do a spot of ‘Engineering’ all at leisure under the cover of the Priors shopping centre, Leamington Spa!! 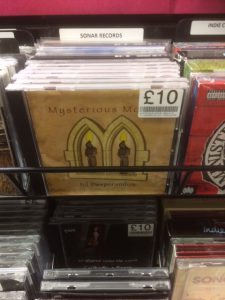 Cary L album featured on Keith Fabrique’s rock show  the recently released ‘Only the Night Knows’  whose Blush track “Seven Years” is on “Volume Two” of the alternative sounds anthology.  Keith played four tracks from the album: “Love On Ice”, “Single Bed” “Only the Night Knows” & “Get A Grip” Both “Single Bed” and “Get a Grip” have also been recorded by Cary’s 1990s band Viktoria’s Sekrets and of course “Get A Grip” is on the 1980 ‘Boys & Girls Come Out to Play’ EP performed by her first band the legendary L’Homme de Terre. Those of you who came to our event on Friday will have heard Cary perform both the latter songs, “Single Bed” as a duet with co-writer Christopher Sidwelll

Find us at the Alternative Sounds party at the Golden Cross pub in Coventry on Friday 20th July at 7.00pm.  See you there!

The new album by Cary L – Only The Night Knows – is now available in the Sonar shop.

We now have the fantastic ‘Alternative sounds Volume 2’ CD in our mitts!  What an amazing job these guys have done – So much history here – we are proud to be associated with this and look forward to more of the same !!  Available for digital download or as a physical CD

02/05 Just listened to HILLZFM and Keith Fabrique’s interview – a mega 7 parter – Keith played a selection of tracks from ‘Mysterious Monks’, ‘The Sweethearts’, ‘Blush’ and ‘Cary L’  in-between stories from Jon and Cary reminiscing over the years and talking about the up and coming release of The Alternative Sounds Compilation CD Volume 2.

The Mysterious Monks have been working hard and have a couple of albums in the can. Working on a release date soon.

Cary L has nearly finished her album and is trying to decide on an album title and artwork for iminent release.

Finished our ‘father and daughter’ interview with the fabulous Keith Fabrique at Tinkle studio.  We talked about the Mysterious Monks, Blush, Cary L, L’Homme De Terre, Cabin Studio and the general Coventry scene back in the eighties. Lots of memories and we have two tracks on the new  Alternative Sounds – VOLUME 2   – Looking forward to hearing it on Hillz fm due to be broadcast on 2nd May 2018.

Cary contributing to a book being written by Keith Hancock (Mosquitoes, DT’s) about the Leamington and Warwick music scene

3 months of the year gone already and April sees ‘ALTERNATIVE SOUNDS VOL 2’ line up completed. Sonar artists Courtiers of Fashion, Mysterious Monks and Blush appear on this volume and it is down to the hard work of Martin Bowes and Andy Holdcroft that this project has come together.  These compilation albums are a historical voice for Coventry bands reflecting the scene back in the day – it wasn’t just all about the ska you know!     Alternative Sounds – VOLUME 2

Snow resulted in the alternative sounds launch date for Vol 1 being delayed;

Tracks from the Monks and Blush accepted onto the Alternative Sounds Vol 2 – Exciting stuff!!

Cary is in Big Sky studios again working on some bass and vocal tracks. She hopes to be finished by early Feburary and mixing….

Volume One of the long awaited Alternative Sounds CD has been released and features Sonar artists as well as many of the bands who recorded at Cabin Studio – The Primitives, Crokodile Tears, Giraffes and Furious Apples.   Further info here Alternative Sounds

We are a family run independent Record and Music Publishing company based in Coventry, England.  Established for over 30 years we have a catalogue of predominantly Coventry based artists.  To celebrate our 25 year anniversary in 2009 we released a compilation album (Sonar Music – 25 years)  and Chris Sidwell (Crokodile Tears) put together a press release for the album which explains it all…..

Plumbing the depths of Sonar Records – 2009

Liverpool had the Cavern Club and Ringo Starr but here in Coventry we had Cabin Studios and Robin Hill.

It’s hard to believe that we’ve now had over 25 years of Sonar Music and indeed Cabin Studios and that’s all thanks largely to one man, Jon Lord (but not the one in Deep Purple as he always reminds us!) Producer Paul Sampson who has also been at the Cabin from the start crops up a lot on these tracks and is well known for his work with Catatonia and the Primitives along with many others.

Gdansk take their name from a place far, far away. ‘Stand up’ is taken from their first E. P. and feature the Cunningham (Cov’s very own Gallagher?) brother and are still gigging today. This might make Gdansk one of the longest running of the ‘new wave’ of Cov. bands (post Lft. Pigeon).

END_OF_DOCUMENT_TOKEN_TO_BE_REPLACED

Sonar artists ‘Mysterious  Monks’ hail from Coventry and have a mysterious, yet fascinating history with the Sonar label.

Graham Wale (keyboards, lead vocals, composer) and Jon Lord (lyricist and lead vocals) met every week to write songs together for over 45 years. They have released 5 CD albums on our Psalm Reader record label available to purchase through the sonar shop.  Read more about them here.

Coventry artists The Croks have been releasing product on dodgy Ticket records since the beginning. See the homepage for latest news.

Read more history of the Croks and find out what they are up to here.  THE TREES is a new project from Chris Sidwell.

Cary has had a varied musical career since forming ‘L’Homme De Terre’ and releasing product on Sonar records since the beginning.  Blush and Cary L albums are now all available from the Sonar Shop as downloads or physical CD’s.   See her own page for more details.

Coventry’s hip duo take their influences from American sitcom ‘Laverne and Shirley’ for the immensely catchy ‘Laverne I Love You’. Once this gets into your head you won’t get rid of it.  Read more about the duo here.

Much loved Coventry band fronted by Greg Crabb with his brother on guitar.

Coventry guitarist/singer/songwriter, Dave Pepper played guitar with Coventry punk band the X-Certs, who began life in 1978 and lasted for 3 years. Between leaving the X-Certs and starting up his biggest band in the U.K (Blitzkrieg Zone), Dave flirted with several musical styles,  one of which was the new romanticism of ‘Courtiers of fashion’.  This is a very rare recording originally released in 1983, the first record on the Sonar record label now available as vinyl or download.

2009 saw the anniversary of the Sonar Records Group of labels set up by Jon Lord.  We decided to see if any of the bands that had released product on the labels would like to get together for a gig and guess what….they did!

Please direct any enquiries for postage abroad to this email.

Welcome to our retail shop. We sell physical vinyl and CD’s from our Sonar Artists -and can ship Worldwide. Please click on the link below

Thanks for looking, come back soon!