Coventry Indie band ‘Furious Apples’ based around the enigmatic Greg Crabb, mainstay of the Coventry Music Scene in the mid 80’s (he also ran the Pilgrim Club disco). Along with his brother Michael, they were heavy giggers and knew how to promote themselves. Members came and went

Coventry – Spring 1983. The Furious Apples vocalist Greg Crabb recruited Robin Hill (Pink Umbrellas) on drums, John Westacott (ex-Urge) on bass and Raphael Moore on guitar, along with Mike Crabb, and Abbe Collins on keyboards to record a 7″ vinyl single – Engineering b/w Belladonna, was released in October 1983 recorded at 8 track Cabin Studio in Coventry.  This was the second release on the Sonar record label and Paul Sampson engineered and produced both songs. A few copies are still available from the Sonar shop  and also from HEAD records in Leamington Priors.

The Apples were the first band managed by Wayne Morris, owner of the European Son T-Shirt shop in Gosford Street and a budding pop svengali. John Peel played the Apples single and some interest was shown by CBS

“I played keyboards on single Engineering/Belladonna ( I don’t know what other keyboard player was doing at the time.) Had great fun at the Cabin studios, though just a wide-eyed school girl at the time and probably spent more time making coffee than I did laying down my track. Rock and Roll”

Almost the truth and Girl on fire have been released to itunes, and can be streamed on Spotify 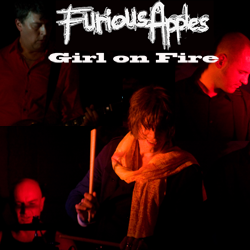 ‘Girl on fire’ a track about Edie Sedgwick